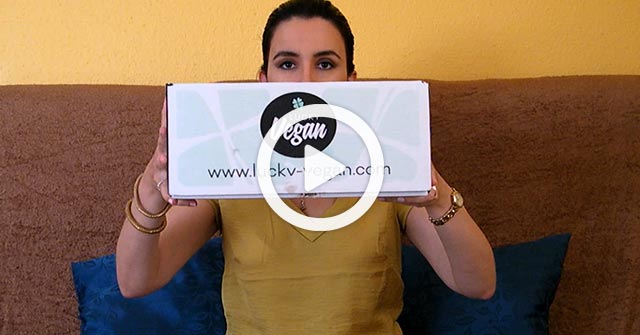 As mentioned in my previous Vegan Box post, from this month I’ve started my Lucky Vegan box monthly subscription. The total worth of the Lucky Vegan September 2016 box is €26.60, meaning that if you ship the box to a Maltese address, the box is worth around €4 more than what you paid for, and if you shipping it to a German address, it is worth around €11 more.

In today’s video I will be giving an introduction to this new box, the Lucky Vegan box, and go through the products I’ve received. From now on I will try my best to leave a transcript inside the video and below it to help you follow the video better.

Hello CrueltyFreeMalta, this is Fiona and today I will be unboxing a new vegan box. It’s not the same vegan box as the last time, it’s from another provider. It’s called Lucky Vegan. Here it is, this is the box. They happen to have similar boxes as the previous supplier. The website is, as you might have seen earlier, www.lucky-vegan.com

The same concept, similar boxes. I already opened the box, and I noticed that this time I got 5 food items and 2 non-food items, you will see them in the unboxing. Let’s start!

The packaging is slightly different. I didn’t see any paper hay that the Vegan Box had. It just has the content and a paper cover to wrap everything.

The first item I got is this one. This is not listed in the product list, as I’ve seen the product list already. It’s a bag, shopping bag, and it says “Choose Life Go Vegan”. I could understand that it’s their own merchandise as it has the luck leaf.

I was happy to see that I’ve received my favourite vegan magazine from Germany, it’s called “Vegan World” and you can check it online for free. My German is not very fluent yet, not even fluent probably, but what I like about this magazine is that it has a lot of vegan recipes.

Next thing I have is the list. The list, I’ve noticed, is different. It doesn’t tell you whether the product is organic, gluten-free, soy free, or fair trade… it just gives a title, description, the supplier’s website, the cost price of the product and even a picture. The Vegan Box didn’t give a picture but you could tell from the name which product is what. Let’s go through the list!

First one, is this breadspread. I always think that I am saying “bedspread”, it’s “bread spread”. It’s vegan and it’s also organic. It’s from “Tartex” Brotzeit Delikatess. I couldn’t understand from the name what’s inside, so I will check the ingredients. It has water, coconut fat, tofu, potatostarch, nutritional yeast, tomato paste, plant egg white from sun flower seeds, salt and spices containing celery, sunflower oil, apple juice concentrate, soy sauce and most of them are from organic farms. It contains 125g and it’s good for when you want to take bread and you don’t know what to put.

I think it’s a problem when someone is starting to eat vegan cause if you have been vegetarian, you are used to put cheese or dairy butter… if you were eating meat before you are used to put ham probably. If you still want to eat bread and want to have it with something this is a good solution.

The second product is this one which I’ve already opened because I love tea and I wanted to see what it is, after I saw that it’s tea made out of vegetables. I’ve never heard of tea made out of vegetables. It’s usually herbs and fruits. You usually find fruit teas but not vegetables, at least I’ve never seen before. So I was curious and I opened the package, and even I tried one of the teas. It’s from “Shuyao” tea set, and I don’t think it’s organic, it doesn’t say. It’s a set of 3. I’ve left the one I’ve opened, out. This is “sweet veggie” and it contains orange leaves and 70% carrots. Inside you usually have the amount of loose leaf for one day.

The next product is the “Terra Vegane Mac&Cheez”. It’s vegan and organic. From what I’ve understood, you mix it with water and if you want it creamier you add plant-based cream.

The next product is a non-food product from “Original Source”, it’s a hand soap. I would definately use this.

Another non-food product is this one. It’s an air purifier from “Attitude”. It’s also not tested on animals, it has the Choose Cruelty Free sign. If you want to see how it looks like it’s this kind of air freshener. You open it, there is a foil, you remove it and it gives a sent. It seems to be also organic. There is written Bio Spectra. It’s has passion fruit essential oils. After I use up my current air-freshener, I will use this one next. It is already giving a scent so I am sure that it works well.

Next product is rice. It’s the “Lotao Smoked Rice”, it’s basmati rice. It’s also organic, so mostly these products are organic. This is something that I will use in my cooking. I like receiving cooking stuff. Just in case you want to know how much it contains, it’s 300g.

Last product, in the list, is this one. I used to buy it from Malta, it’s the “Oskri Coconut Bar”. I used to buy it as a Bounty alternative since the mother company of Bounty, Mars, is known to test on animals.

That’s all for today from the Lucky Vegan box. It’s my first Lucky Vegan. I hope you found this video useful. See you in the next video. Please comment below for any suggestions, questions you might have. Yeah, see you next time. Bye!