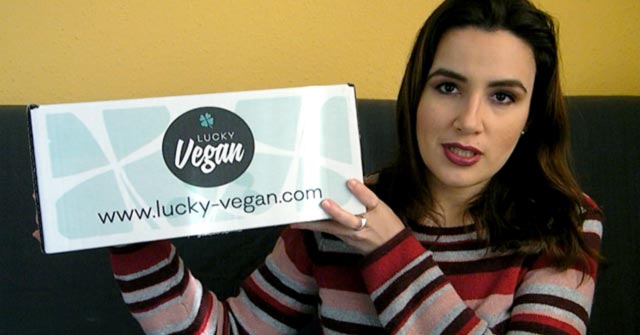 Right after receiving my Lucky Vegan Box February 2017, I took advantage of a rare sunny weather and filmed this video. Although I am living in Germany, I always make sure that I order products that are available or that can be delivered to Malta. So yes, the Lucky Vegan box is also shipped to Malta. 🙂

Hello, CrueltyFreeMalta! This is Fiona. Today I will be unboxing the Lucky Vegan Box February 2017.

The first item I have, as usual, is the list of products. I have 1, 2, 3, 4, 5, 6, 7 products. The total worth of 24.53€, while I’ve paid 14.90€.
So I nearly gained 10€ more. Next, I have the vegan magazines. This time I have the Vegan World magazine. It’s currently my favourite vegan magazine. It has lots and lots of vegan recipes. Unfortunately, it’s in German but I can easily understand German recipes. They’ve also sent me another magazine which is new “Kochen Ohne Knochen”. It’s vegan, I will check it out later.

So moving on to the products, first I have the Eat Real chips. Quinoa Chips with Chili & Lime flavour. It’s suitable for vegetarian and vegan, and it contains 80g. I find these good for my Vegan Mondays. So next Monday I have something new to snack on.

Next product is from Sweet Lazy Days, it’s days it’s the Chocolate Lady Cake for Microwave. It’s when you will feel like eating a cake and you don’t have the time to go through all the process. You have an easy-to-bake cake if you own a microwave. It’s vegan and it’s also certified organic. You have 64 g.

The next product is from Provamel. It’s the Quinoa-Rice Drink. It’s vegan and also certified organic. You have a litre pack.

Then I have from Nono. It’s Beetroot Raspberry truffles. They come in a small packet. I think I have one or two truffles. I’m trying to check what’s the weight. Probably it’s around 12g. It comes in a cute box. It would have been nice if my vegan box came on Valentine’s Day, as it would have looked like a Valentine’s Day gift.

Next, I have a non-food product, which is this PHB Cosmetics Handcream. It’s a restoring hand cream made up of rosemary and chamomile.
It’s for dry skin, damage and also irritated skin. It’s vegan, approved by the leaping bunny, also halal-friendly, natural and organic.
I think it’s ideal for this time of the year because my hands are getting often dry in this cold German winter. It came in the right time.

Last product is from AlmightyFood. It’s the Golden Blonde Cashew cacao bar. It comes in this box. I use vegan bars during my Vegan Mondays when I go to my German class. I can open it cause most probably I will eat it next Monday. It happened to be broken but it looks like this. This is a piece of it. It says that it’s ethical, vegan and without GMOs. Also certified organic and it has 32% cacao. It’s also Soil Association Certified.

That’s all from this month’s vegan box. I hope you liked this video. If you did please click the like button below. Also if you are not yet subscribed, please click the subscribe button so that, you get notified when I have a new video. Usually, I upload the video and then write the blog post.

See you next time. Thank you and goodbye!