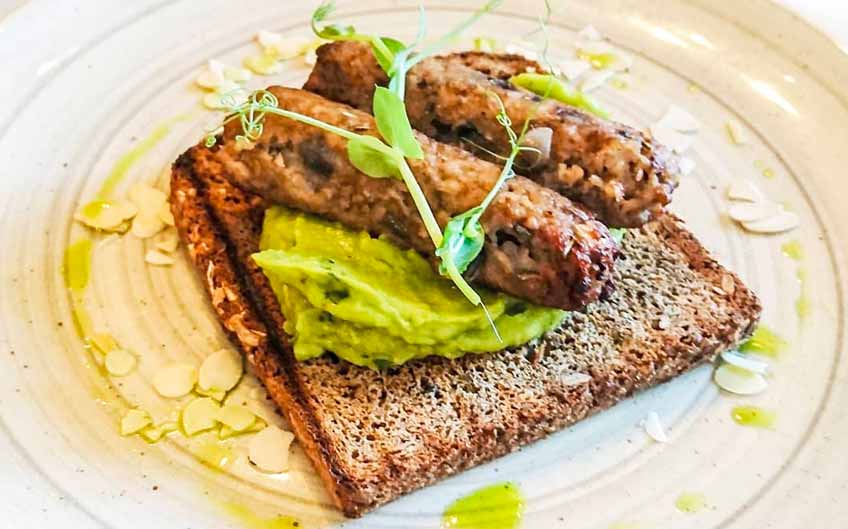 I am currently working at a 10-hour-shift Summer job. Most of the time this causes me to arrive home dead tired and not feeling like cooking. Since we are living in Swieqi, we end up going out to vegan-friendly restaurants in St Julians.

It is not the ideal way to eat. However my 4 vegan dinner recipes have become a bit boring, and I look forward many times to go out and try a vegan dish which I haven’t tried yet at home. I can’t master more recipes before I move back to Germany, where most of my kitchen equipment, herbs, spices and ingredients are.

Before I used to be happy when a restaurant had a vegetarian option. However, now that I have started my vegan journey I start expecting vegan options. The availability of vegan-friendly restaurants its still a bit slow but faster than in Offenburg, a small German city where I am supposed to be living in. Let’s see how faster it gets after I move back to Germany!

I have found and managed to try 4 vegan-friendly restaurants in St Julians. So I thought that apart from sharing what I had and where on Instagram, I group by location my Instagram food posts in a blog post.

The eateries that I below are listed in alphabetical order.

I was invited to try the Carob Tree, the new Food Court in Spinola St Julians. At first, I thought I might not find many options to eat. However, I found various vegan options. To simplify my choice, since my parents, who joined me to the Carob Tree decided to take Indian food, I decided to do so too. Tuk Tuk, the South Indian street food outlet at Carob Tree, marks its vegan-friendly food with VG to differentiate it from the vegetarian label V. I had noticed this labelling after I had decided to take the obviously vegan, Vegan Korma. It included rice and a free drink. Most probably it is a lunch offer.

After a few weeks from its opening Crust started offering a small selection of vegan options. I didnt know where to start. Thinking that I might need more avocado in my life, I chose the vegan option of the Vegetarian Smashed Avocado. Crust menu displays the vegan-options by listing and describing a vegan option of some non-vegan dishes.

What is your impression about the newly opened Crust? I have finally managed to try it out last week for Sunday brunch. I could find 3 vegan options to choose from. Three options are already enough for me or else i would take a whole hour to decide on what to order. For this visit I had chosen to try the vegan option of the #SmashedAvocado. I managed to confirm that I am not much of a fan of #ryebread. So next time i will try out one of their other two vegan options. . . . . . @crustbakerybarbistro #malta #veganblog #veganfood #veganmalta #veganblogger #veganfoodshare #veganmaltaeats #whatveganseat #gozo #vegansofig #vegansofinstagram #veganfoodporn #plantbased #veganlifestyle #veganism #vegangirl #govegan #vegans #veganlife #sangiljan #crustdelibakery #stjuliansmalta #bestofvegan #dairyfree #veganeats #vegancommunity #stjulians

Speaking of fast food, as soon as Hugos Burger opened I went to try their Vegetarian Burger. After converting to vegan, I thought I wont be going anymore. Luckily they had launched falafel which they proudly promote as vegan. So whenever I go there I try ordering falafel. If you happen to choose to take the falafel salad instead, order it without the tortilla and the dressing as these two contain milk.

I think Suruchi was the first Indian restaurant in St Julians to mark vegan options on the menu. Suruchi is my most visited Indian place whenever I visit Malta. Till last year I was still ordering my favourite Indian spinach and cheese dish Palak Paneer from Suruchi. This year I started trying out their vegan options.