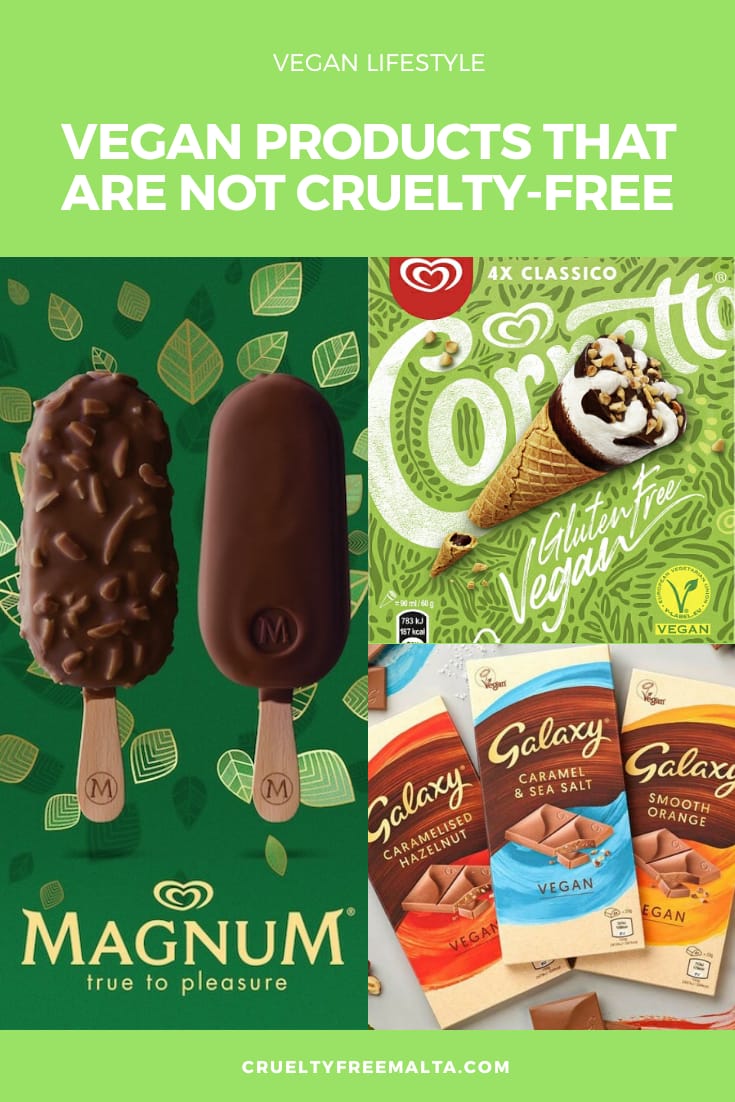 There is the misconception that when the product is vegan it will automatically mean that the brand is cruelty-free. Unfortunately, it is not like that at all, not even if it has the V-Label Certification. This V-Label only certifies per product and not the brand as a whole. This means that it certifies that that vegan item contains no animal ingredients and was not tested on animals. This also means the brand is free to test their non-vegan products on animals. In my opinion, this does not make sense, so when possible, I try to avoid the products/brands that I have listed below.

Around 4 years ago Danone had bought Alpro and it’s sister brand Provamel. A year earlier, Danone’s animal tests had been exposed by Cruelty Free International. Since then I tried to stay away from Alpro unless there is no alternative.

If you visited the supermarket recently, you might have noticed the vegan certified Ben & Jerry’s ice-cream. The company where I was working at sometimes stocked one of them and so I tried one to see how it is. Unlike normal ice-cream, it was hard. Had to wait around 15 minutes until I could dip the spoon in it. In case you did not know Ben & Jerry’s are owned by animal test supporter brand Unilever, which might mean that Ben & Jerry’s ice-cream might be too.

SuperCARAMELFUDGEilisticexpialiDOUGHcious.⁠ ⁠ Find all your Non-Dairy favorites near you at the link in our bio!⁠

Algida has recently launched a vegan version of their Cornetto, while the vegan community was excited with this news, I was not amused. Algida is owned by Unilever, which till now is known to support animal testing. Unlike cosmetics, in food, there is currently no way to tell whether a brand tests on animals unless it’s owned by a corporation that is known to test on animals. That is why I don’t consider Algida and the brands which I will be mentioning next not cruelty-free.

A year ago Galaxy launched two vegan chocolate bars. I have not stopped eating Galaxy because I have started my vegan journey. My last Galaxy bite was earlier than that. It was as soon as I started this blog and Mars are known to test their products on animals to check how much sugar is too much and so on. PETA had a campaign website dedicated to Mars’ animal tests. So although I was a big fan of Galaxy and other Mars chocolate such as Bounty, I had to practice what I preach and boycott any Mars-owned product.

Not sure if Herbalife is a food brand. However, since their representatives like to share their posts on vegan food groups, I thought I would list it here. As I mentioned in my Herbalife cruelty-free status post since they sell their cosmetics in China, I don’t consider them to be cruelty-free. So if their cosmetics are not cruelty-free, I would assume even the rest of their products won’t be.

In the vegan food groups, I have seen a lot of vegans sharing their vegan Magnum purchase. However, just like Cornetto, I currently don’t consider Magnum to be cruelty-free until Unilever stops supporting animal testing.

Apart from animal testing, Nestlé seems to be popular for other unethical issues. Recently their coffee brand Nescafé has launched vegan instant coffee options. Luckily by the time they launched them, I managed to learn how to prepare my own vegan macchiato.

As mentioned earlier, 4 years ago Provamel was bought by Danone. Luckily there are other brands that offer plant milk, that we don’t need to depend on them.

I was happy to discover that Burger King launched a vegan burger without partnering with a brand that test on animals… or so I thought. However, I had recently found out that the brand of the patty Burger King use for their Rebel Burger has been bought by Unilever two years ago. Yes, The Vegetarian Butcher agreed to sell his brand to an animal-testing brand. Too bad, it was a juicy burger.

"Would you like cheese with it?" said the lady at the counter after I told her I want my #RebelWhopper without mayonnaise. 🤦🏻‍♀️ Before the Corona issue started I had the "chance" to try this recently launched #veggieBurger from #BurgerKing #Germany. Since I was planning on visiting Malta soon, I thought of trying both the German and Maltese version of this burger and see if they taste the same or not. 🤷🏻‍♀️ However, now that my flight got cancelled, by the time I can visit Malta I would forget how the German one tasted. . 📍 @burgerkingde @burgerking_malta 🌱 BURGER KING REBEL WHOPPER 💭 Unlike McDonalds Germany's new vegan burger, the patty was juicy and the right size. However, same as the McDonalds vegan burger, the patty brand is owned by a brand who is known to support animal testing. 🌱 VEGAN: Yes (when asking for no mayonnaise and rejecting the cheese.) 🌾 GLUTEN: Yes 🌰 NUTS: No 🥜 SOYA: Yes 🐒 PALM-OIL: Yes 💰 As a menu €7.29 in Germany 🤷🏻‍♀️ BUY AGAIN: Unsure. Since the brand #TheVegetarianButcher has been bought by #Unilever, I am unsure whether I should support it again. . . . . . . #veganoffenburg #offenburgvegan #offenburg #veganbadenwuerttemberg #veganbadenwürttemberg #veganschwarzwald #kinzigtalgoesvegan #veganortenau #ortenauvegan #ortenau #kinzigtal #badenwürttemberg #schwarzwald #schwarzwaldvegan #vegandeutschland #vegangermany #blackforest #veganbloggerin #veganwerdenwaslosdigga #burgerkingrebelwhopper #deutschland #veganmalta #malta #burgerkingmalta

How would you deal with such news? Would you still buy your vegan food from these brands, or find hopefully a more ethical alternative?