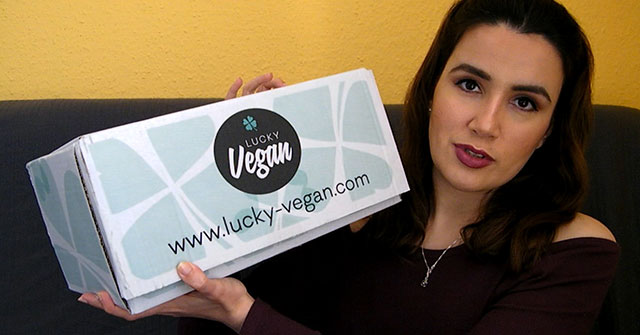 The first item in the box is the list of products that the box contains. The total worth of the Lucky Vegan Box March 2017 is €23.18 while I paid €14.90, for it and if you ship it to Malta you have to pay an extra €8, if I’m not mistaken, which is the delivery costs. I have 7 food products
this time and 1 non-food product. So let’s check what magazine I’ve received this time.

It’s my favourite Vegan World magazine. The March and April 2017. I like this magazine, 1 it’s free and 2 my German although I studied up to B1, I’m still not as fluent as a native German speaker. So I tend to understand more the recipes which this magazine as a lot of rather than the articles.

The first product in the box is the Provamel Soya Dessert. It’s vanilla flavour soy dessert. It’s vegan, gluten-free and certified organic. It contains 500 ml and it weighs 525 g.

The next food product is Govinda Sesam Früchte Taler, which is this one. It means Govinda Sesame Fruit “pieces”? I don’t know what’s “Taler” exactly. From what I am seeing in the packet, they are snacks made out of sesame and fruit. It’s raw, certified organic and vegan. It weighs 100 g.

The third food product in the box is from Vitam, it’s this bread spread. It’s the Vitam Wie Leberwurst, which means Vitam Like Leberwürst. It’s a bread spread made to taste like the German Leberwürst. It is certified organic, vegan and it weighs 120 g.

The fifth food product is a drink. It’s the Taste Nirvana Coco Matcha. It has 280 ml. It’s coconut water with matcha green tea. It’s vegan and without GMOs.

The last food product in this box is from Kiwa, it’s the Kiwi Kochbananen Chips. It means Kiwa Cooked Bananas Chips. It’s gluten-free, without GMOs and made from sustainable palm oil from Ecuador. It weighs 85 g. The last product in the box is the non-food product. I’ve left it for last on purpose because it’s only

The last product in the box is the non-food product. I’ve left it for last on purpose because it’s only 1 product. It’s the Weleda Duschcreme Reisegröse, meaning Weleda shower cream in travel site. I’ve got the sea buckthorn vitalizing cream shower cream and I also have another shower cream, travel sized for sensitive skin.

Thank you and see you next month.

You have the chance to Win the Govinda Sesame-Fruit Coins found in the Lucky Vegan Box March 2017, all you need to do is answer one or more of the following questions, by using the comment box below:

Giveaway is open to residents of Malta and ends on the 22nd April 2017.