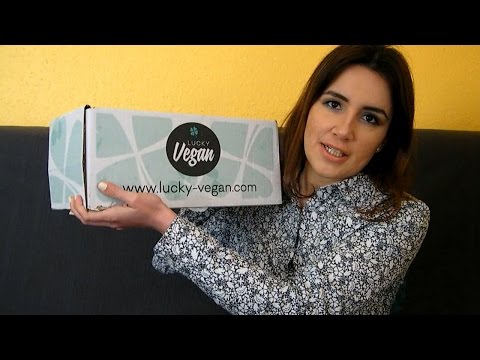 Hello CrueltyFreeMalta, this is Fiona and today I will be unboxing my April 2017 Lucky Vegan box.

This is my last Lucky Vegan box as I won’t be subscribing to any other vegan box for this year. One
reason is because I’m unemployed and I my funds are going down and not up. The
second is because I get a lot of items which I don’t use or which I don’t like the taste of or even I get
the same items nearly every time so this is my last Lucky Vegan box unboxing video. So
let’s start unboxing.

First I have as usual the list of products that the box has. I have one two three four five six food
products and one non-food product. The total worth of the box is 27.60 EUR while I paid 14.90 EUR.

Then I have some promotional material on the companies that left an item in the box.

Two magazines about veganism and they are in German. One is the Vebu Magazine and the other one is Kochen Ohne Knochen which means cooking without bones.

The first product is from Davert is the Davert Superfood Toping which is this one. It’s 100 g and it’s organic,
certified organic and vegan. I got already 3 of these products with vegan boxes and this is one of the reason I decided to stop subscribing for these kind of boxes.

Then I have this which is an Easter chocolate. What I like about the Lucky Vegan box next to the other vegan
box I was subscribed to, is that on the month of an event they give you something that is related. For Christmas
I got some Christmas treats and for Easter I got this one. It’s the Zero Zebra Osterschokolade, Zero Zebra Easter Chocolate. It’s certified organic, vegan and it contains 75 grams.

Then last food product is the Terra Vegan Mega Exx. I think it’s an egg replacer and it’s vegan and certified organic. It contains 150 grams.

I’ve notice that they’ve put two of the Veganz Goji Inca Riegel. I don’t know if it’s a mistake or there were supposed to put two.

Last item is the non-food item. It’s this one, it’s Lima Chocola Peeling Seife which is a peeling soap. I get a lot
of this peeling soaps also with the vegan boxes. It’s already the third one that I got. I think I’ll keep it for Christmas because it has a strong cinnamon scent.

Yeah so that’s all for today. There won’t be another video next time with regards to unboxing vegan
boxes. I might subscribe which is not really subscription, it’s a one-time payment to the seasonal ones. For example they have usually one for Easter specifically with Easter items and more for Christmas. I might subscribe to that one, or if I manage to use up all my beauty products, I might try to subscribe to the vegan
beauty box. I will see in the future.

This is the last video, I hope you like this video. If you have any ideas of what videos I should post in the upcoming months or weeks please let me know in the comment box below.

Like this video if you’ve enjoyed watching this video and subscribe for the to my channel to get notified on the next time I do a video.

Thank you and see you next time.