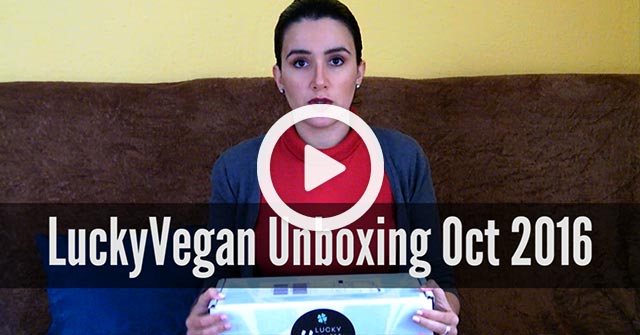 Last weekend I’ve received my second box from Lucky Vegan. However I couldn’t film the unboxing video soon after due to lack of light in my room and a cold I am still struggling with.

Last Wednesday I had a bit of light in the room so I took the opportunity to film the unboxing video. So here it is:

Hello Crueltyfreemalta! This is Fiona and today I will be unboxing my Lucky Vegan box for October 2016.

I’ve received it some days ago but now I’ve found a bit light in the room and decided to film it today.

So let’s start the unboxing!

The first product is from Original Source, it’s a shower milk. It’s made out of Cherry and Almond Milk, and it costs 1.95€ for 250ml. I’ve received a product from Original Source last month in my September Lucky Vegan box. It was a hand soap and I am already using it, it was Vanilla and Strawberry flavour. Now I got a shower milk, which is like a shower gel, and coincidentally it came on time cause I am running out of shower gels. So next month or by the end of this month I will be using this shower milk.

The next product is a raw bar. It’s Bombus Raw Protein Bar and costs 2.90€ for 50g. It’s made out of peanut butter, it’s gluten-free, vegan and it has no added sugar, and also it has 20% protein.

The next product is from Simply Raw, it’s called Raw Plus. It’s powder that you put on your smoothie, cereal, salads or salad dressing.
I’m assuming there are sachets inside that you can open and use. For 6.95€, you have 40g and it’s also organic. Ah, you have 5 sachets of 8g that’s why 40g.

The 4th product is a product which I’ve received in a previous vegan box. I haven’t drank it yet so I can’t tell you if I liked it or not. It’s from Friya Superfood Drink Chia. It costs 2.99€ and it has 200ml. It’s vegan, no added sugars, no added preservatives and lactose-free.

The 5th product is from Davert, it’s a 5 minute quinoa. It costs 3.99€ for a bag of 180g. At the back it has a recipe which you can do with this quinoa, and which is a good idea since some people are new to quinoa and they don’t know how to use it and what to do with it.

The 6th product is one of my favourite, it’s vegan fruit gums. It’s Seitenbacher Frucht Hütchen which I guess it means little hats. It’s strawberry flavour and 100% vegan. I am happy to have received this cause I’ve found vegetarian fruit gums but I haven’t found vegan ones.
Vegetarian I mean gelatine-free and carmine-free. It didn’t have gelatine and carmine but had beeswax. So that doesn’t make it vegan, so I am happy to have received this product cause now I know which brand offers vegan, gelatine-, carmine- and beeswax-free fruit gummies. It costs 1.49€ and it has 85g.

The next product is a face mask, it’s from Luvos and for 1.49€ you have 2 sachets of 7.5ml. These masks are ideal for when you travel and if you have a friend with you can share 1 sachet, in my case that’s what I do. 1 sachet is too much for me so I take half of it and give the other half to someone else. So from this I have 4 servings.

Last product is cookies! This is a favourite product from this Lucky Vegan box. I haven’t tried it, it’s just from what I am seeing I think I would like it.
It’s chocolate cookies, it’s Rice Mice Cocoa Mini Cookies. It’s 3.75€ and you have 100g. I think I will take these, this evening, while watching a movie on Netflix. They are vegan, organic and gluten-free. They have no nuts and no soy.

That’s all for today, I hope you liked the video. Please click thumbs up in the bar below, and also subscribe to this channel to get notified on new videos like the unboxing of my next vegan box and any videos I have in between.

Yeah, that’s all and see you next time! Bye!