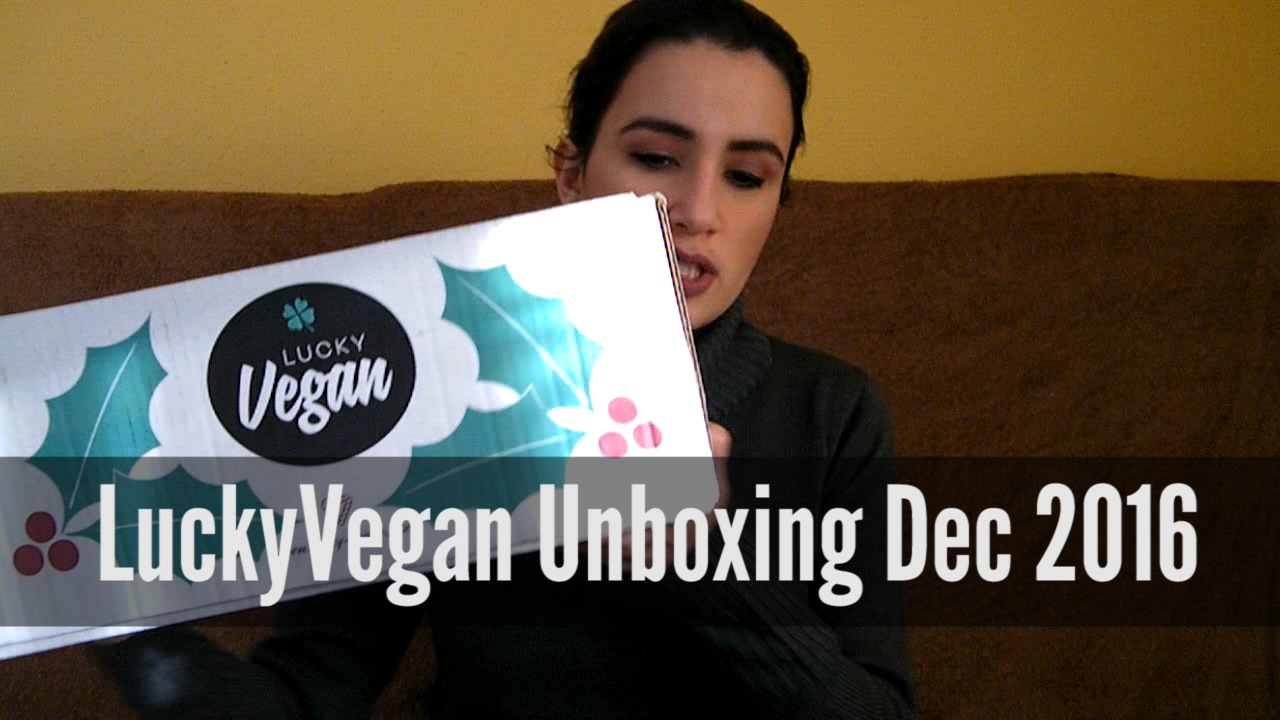 It’s Boxing Day! Unlike Germany, in Malta we open our presents the day after Christmas i.e. 26th December which is… TODAY!

Check out the video below to see what I’ve received in my December Lucky Vegan box. <3

Hello CrueltyFreeMalta. This is Fiona and today I will be unboxing the December 2016 Lucky-Vegan Box.

As you can see it’s Christmas themed but I haven’t ordered the Christmas box. It’s just the monthly box which is decorated in Christmas design. So let’s open the box!

First thing I find when opening this box is a postcard from Lucky-Vegan. It says “A Very Merry Vegan Christmas” The packaging is in red while usually it comes in around a light blueish-green or greenish-blue wrapping. Also I got a sticker saying “Frohe Weihnachten” closing the wrapping which means “Merry Christmas” in German.

The first product I have on top is the VebuMagazin. It’s a paid magazine, so I think it’s part of the products which I should receive this month. I usually receive 7 products but this time I received only 6, so I am guessing that the magazine is the 7th product. For now from these magazines I only check the receipes because it’s all in German and my German is basic. I can manage to follow the recipes but the articles are currently a bit hard for me. So let’s start unboxing!

So let’s start from the first product, it’s the Provamel Hazelnut Drink. It’s 500ml, and it’s vegan and certified organic.

The next product is from Davert. It’s a Chia Topping in Mango and Lucuma. This product is to put on top of your cereal or yogurt or porridge. It’s 200g, and it’s organic and vegan.

Next product is porridge. It’s the 3bears Apple and Cinnamon Porridge. It contains 400g and it’s vegan. They have also included a coupon code which I can use on their website since I am a Lucky-Vegan subscriber.

The next product is from Die Hanflinge, it’s Hanf Lebkuchen. I will open to see what’s inside. This is what there is inside, how they look. It’s 150g.

Next product is my favourite, it’s vegan gummies. It’s very hard to find vegan gummies in German supermarkets. I do find vegetarian, which means without gelatine and carmine but with beeswax. However without beeswax, I often don’t find. I only manage to get gummies without beeswax from these vegan boxes. These vegan gummies are from Mindsweets, they are the “Weihnachtsbärchen” which means “Christmas Little Bears”. They are certified organic, gluten-free and vegan. It contains 50g.

The last product is not a food product. It’s a BioAirspray from Primavera. It’s what we call in English a Room Spray. The blend is called “Sternentraum”, which means “Starry Dream”. It contains cinnamon, orange and grapefruit, all organic. It’s 100% natural and I believe Primavera are also cruelty-free. I have 30ml and it smells like Christmas.

Although I haven’t ordered the Christmas box, I’ve still got products that are in a way Christmassy. The airspray, the gummy bears, the Lebkuchen I think its eaten during Christmas, and also one can consider the apple porridge as a Christmas product.

That’s all for today, I hope you liked this video. If you did please click the “Thumbs up” button below. Also comment with any questions and suggestions that you might have. I will be leaving a link to the Lucky-Vegan website in the description.

Happy Christmas and see you next time! Bye!