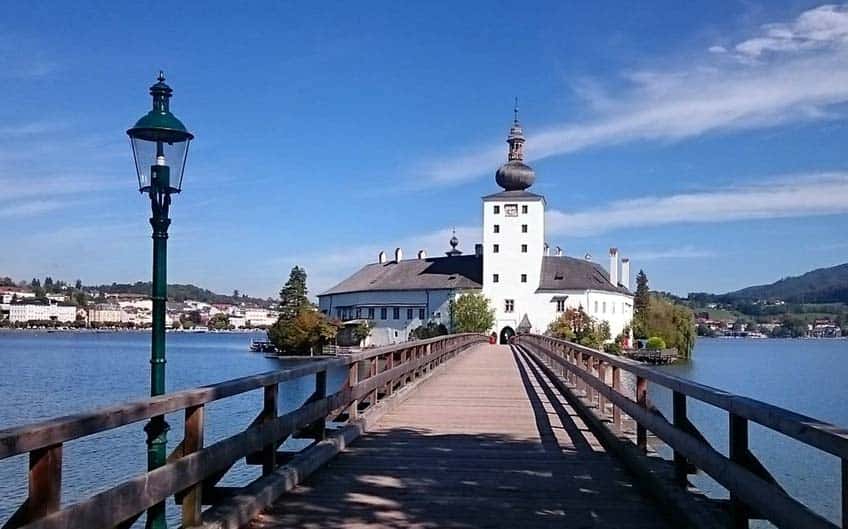 The first day was rainy and foggy, so we focused on indoor attractions. First, we visited the Dachstein Ice cave at Obertraun. We were going to buy the ticket that includes the Mammoth Cave. The reason being that I thought the Mammoth cave has the remains of a mammoth or a frozen mammoth. However, my boyfriend pointed out that the word mammoth is referring to its size. The same as we Maltese call the temples in Gozo “Ġgantija”.  The Ġgantija temples are thought to be built by giants (ġganti).

So we just booked the ice cave tour, which seemed to be a good choice since there were two separate uphill walks to reach the caves. One was already tiring for me. Parking is free and the tour was in both Austrian German and English. Thanks to the Salzkammergut card, we have paid €28 (€3.60 less) per person.

Salt mine in Hallstatt

After we finished from the ice cave, we went to the nearby village of Hallstatt to visit the oldest salt mine in the world. Since we spent the morning at the ice cave and since the salt mine closes at 3 pm, we were in one of the last groups. If I had known that there is a long queue for the salt mine, I would have planned it for the morning. However, we still managed to enjoy the tour.

The tour of the salt mine was also in Austrian German and English. They had slides to go down from one level to the other. Instead, I have used the stairs which were on one side of the slides. Somehow I have a fear of slides.  The salt mine tour is our most favourite attraction from this holiday.

It was so favourite that we ended up buying souvenirs from the salt mine’s shop. I don’t usually buy souvenirs from an attraction’s souvenir shop as I find their souvenirs to be expensive and sometimes cheap quality. However, this time I did and it was a good choice. One of the reasons being that in the village’s souvenir shops they were selling the same salt products at a higher price. Also, I have noticed that some were also selling Hallstatt salt which I didn’t see in the mine’s shop. So I doubt if it’s the original salt. I was hoping to find Hallstatt salt lamps in the salt mine souvenir shop but they only had the imported Himalaya ones. Thanks to the Salzkammergut card we have paid €24 (€6 less) per person.

I went to #Austria for the scenery of mountains and lakes. However, the most interesting place we have been to during our stay at #GrünauImAlmtal was #Hallstatt's #SalzWelten. It's the oldest #saltmine in the world, and it houses the oldest wooden staircase in Europe if not the World. I made sure I buy some souvenirs after the tour. Where can you get purer salt than from a salt mine? TAGS: #travel #travelling #vacation #visiting #traveler #instatravel #instago #wanderlust #trip #holiday #photooftheday #lifeofadventure #tourism #tourist #instapassport #instatraveling #mytravelgram #travelgram #travelingram #igtravel #Salzkammergut #ig_worldphoto #traveling #travelblog #Österreich

Our second full free-day happened to be sunny. It was the right weather for the two outdoor attractions which I had on my list. First, we visited the town of Gmunden as I was planning to take a boat tour on the Traunsee lake. However, my boyfriend pre-paid parking for fewer hours than what we would have needed for the boat tour. I wanted to do the boat tour mainly because I wanted to see the castle at Schloss Ort, and because I wanted that my boyfriend takes a break from driving since he’s been driving a lot the last two days. However, he was ready to drive to Schloss Ort, so we planned to go around Gmunden and see what else there is to see, then drive to Schloss Ort.

Last Monday the weather was good for photos at #GrünauImAlmtal, so we took the opportunity to the outdoor sightseeing. We went to checkout the village of #Gmunden as it seemed to be a bigger village than Grünau im Almtal. The weather was so good that the photos we took with our phones, of lake #Traunsee, looked like postcard pictures. TAGS: #travel #travelling #vacation #visiting #traveler #Österreich #austria #wanderlust #trip #holiday #photooftheday #lifeofadventure #doyoutravel #tourism #tourist #instapassport #instatraveling #mytravelgram #travelgram #travelingram #igtravel #instalife #traveling #travelblog #Salzkammergut #ig_worldphoto #instago

The last place we visited in our holiday is Schloss Ort. Our GPS couldn’t give us directions to its location. We knew that it’s somewhere close to Gmunden and in the Traunsee lake. Therefore, we drove around the Traunsee lake a little further than Gmunden. After getting lost once or twice we managed to find Schloss Ort with the help of Google Maps.

When I was looking for attractions in or around Grünau im Almtal, Schloss Ort was popping up frequently. You can’t blame Google, a castle on an island in a lake, surrounded by mountains is a nice and peaceful sight. Looks like a castle from a fairy tale. Speaking of fairy tales. This castle is was believed to be built for the giant Erla who wished to live with his lover Blondchen, a mermaid who was fond of the lake. You will read more about this legend in the castle. It’s the only information I could find in English inside the castle. The entrance fee to the castle is just €3.

A short drive away from #Gmunden centre there is #SchlossOrt. It is a #castle built on an #island. A legend says that the castle was built by a giant so that he could live with his lover, a mermaid who was fond of the #Traunsee #lake. To go inside the castle, there is an entry fee of just €3. #Salzkammergut #grünauimalmtal #travel #travelling #vacation #visiting #traveler #wanderlust #trip #holiday #lifeofadventure #doyoutravel #tourism #tourist #instapassport #tb #mytravelgram #travelgram #travelingram #igtravel #instalife #tbt #lovelife #traveling

That’s all I have for you today. Unlike previous travel posts, I tried to keep them as short as possible and in a list format instead of a journal format.

Which format would you prefer for travel posts? Should I continue adding travel posts every now and then? Or do you think that they are not relevant to the blog’s theme? Also if you have any suggestions on where to visit for my next holiday, please do tell me. Thank you

DISCLAIMER: This is not a pr or sponsored post.